search
Type a keyword to find what you're looking for...
HOME|PR|Newsroom

Haesung DS , a Korean Company, Develops 34-Inch Large Area Graphene, Mass Production Planned in the Second Half of the Year

Haesung DS , a Korean Company, Develops 34-Inch Large Area Graphene, Mass Production Planned in the Second Half of the Year

A Korean company has developed a mass production technique for Large Area Single Crystal Graphene of a scale of over 30 inches that has a uniform characteristic, for the first time in the world, and will start the mass production during the second half of the year. As a result, it seems the early commercialization of graphene products will be made possible.

The new material of dreams, graphene, has been developed in small sizes of less than one inch in laboratories, but no one had ever succeeded in mass producing in a large area of over 30 inches. The graphene that had been developed until now were all merely the size of a nail(100×100㎜).

The graphene that Haesung DS has developed is the world’s largest. The synthetic time, which was an obstacle in commercialization, was dramatically reduced to 17 minutes. Until now, the time needed in synthesizing a single sheet of graphene was three to seven hours.

This company developed a separate synthetic equipment for graphene with a semiconductor equipment company called PNS. This equipment can synthesize a total of four graphene sheets at once, through Chemical Vapor Deposition(CVD) that uses the rapid thermal annealing technique. The rapid thermal annealing technique that allows rapid heating and cooling during vacuum processing played a key role in reducing the processing time. 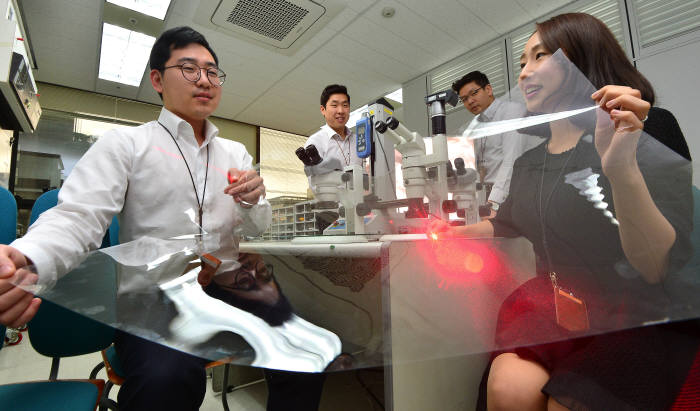 The company revealed the large area graphene panel for the first time at the MRS, the largest exhibition in the material field that has been taking place in San Francisco, U.S.A. from April 4th, and received the world’s attention. Not only technical cooperation with some global enterprises but also negotiation on future purchases of the product are in progress.

This company has also jointly developed the synthetic technique using the Graphene Oxide(GO) method with Korea Electronics Technology Institute, and is preparing for its commercialization. Mass production of graphene that is more suitable for batteries, medical materials, etc. is possible through the GO method.

Graphene is nano-structured, in which carbon atoms are arranged in hexagonal shapes. It is called the material of dreams, or wonder material since its conductivity is 100 times that of copper, and has outstanding intensity and elasticity.

CEO Cho, Don-yeop said, “We were able to quickly and stably produce high quality graphene by combining ultra precision processing technique, surface preparation technique, etc., which we had secured through the existing semiconductor component business. It is highly useful as a transparent electrode. We will provide a total solution to not only graphene material, but also related equipments, processing technologies, etc.”

Haesung DS is a company that was made as over 500 people that seceded from Samsung Techwin’s semiconductor component operation division were absorbed in the Haesung group(Share 60%) last May. Last year’s sales were around 225 million dollars, and this year’s sales goal is 275 million dollars.